In August of 2015 one of the best companies in the pizza industry contacted me regarding taking a tour of their facility in Modesto, CA.  Yes, I’m talking about my favorite tomato company Stanislaus Food Products.  Owned and operated by the Cortopassi family, they epitomize the correct way to run a company from top to bottom.  More on that when I post about that adventure, but for now enjoy reading about my visits to Tony’s Pizza Napoletana and Capo’s. (Bonus Story at Bottom)

These restaurants are in beautiful buildings located in incredible neighborhoods.  Just walking around in the area on a Friday afternoon is good enough, but going inside and gorging on tremendous amounts of pizza, that’s crafting amazing pizza memories!

For those unfamiliar, Tony Gemignani is a big deal in the pizza industry and San Francisco for that matter.  At the time, our entire back end system was run using company that had an office in San Francisco and one of my reps met us for a late lunch.  She was super excited, and had no idea we were actually going to be sitting down with Tony for a pizza lesson!  Tony has been in the pizza business since 1991, and has won numerous pizza awards and championships.  Probably his most notable was being the first American to win the best Margherita at the World Pizza Cup in Naples, Italy.  I remember sitting at a demo he was leading, when he was rehashing the story of how he won.  Basically security came over and told him that he had won 1st place, but to remain calm.  He was to go up on stage, graciously accept the award, and get back to the hotel.  He would have to celebrate behind closed doors because the Italians weren’t ready to let an American win their most prestigious pizza award.  More championships for different styles have gone his way as well, 10 or 11 more I believe.  This lead him to open several successful restaurants and even author the book “The Pizza Bible”.  Because of his many successful restaurants, consulting jobs, pizza school, and writing The Pizza Bible, Tony is thought to be one of the most influential people in the pizza industry.

Now I’ve had the pleasure of sitting in at some of his demos in Las Vegas, and I’d even been featured in a book called “Passion For Pizza” with him.  At the 2015 International Pizza Expo in Las Vegas, several people featured in 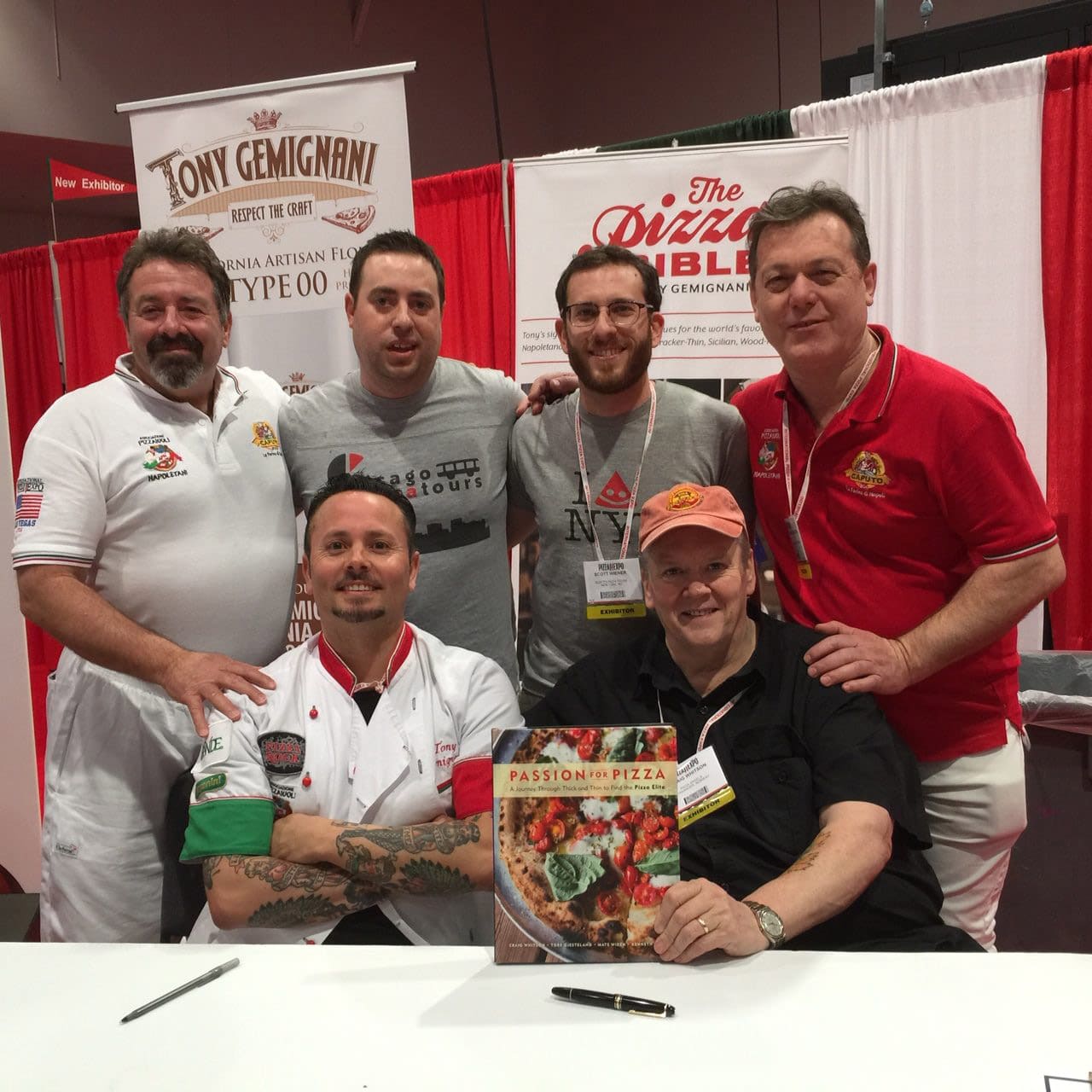 the book got together for a pic.

What a collection of pizza legends to be pictured with, I kept waiting for them to say, “ok now can we get the Chicago Pizza Tours guy to step out for a second!”

So I’ve had Tony’s pizza several times, I’ve been able to talk with him on several occasions about pizza, but had never been to San Francisco to see where his success started.  On this Friday afternoon I arrived around 2:30pm with my wife and account manager Lauren.  The time 2:30pm is perfect because it isn’t lunch, and it isn’t dinner so I can avoid the crowds right?  WRONG!  Thank goodness I had texted Tony earlier in the week because the place was slammed, not even 3 spots at the bar.  Lucky for us, Tony had saved a booth in the back by the oven for us, so we made our way over there and started ordering pies.  Well not exactly.  First he brought us back into the kitchen.

You can spot Laura Meyer (pink shirt) a legend in her own right, and next to that is their starter.  This is the dough that they pull from every day to start the next day’s batch of dough.  The next set of pictures are of Tony’s oven and dough for his Neapolitan pies

Below is the finished product of the Detroit Style Pizza, and the NY Style

Tony was a gracious host and explained the process for a lot of their pizza making and operations to me while the restaurant was pretty busy, here we are in the back 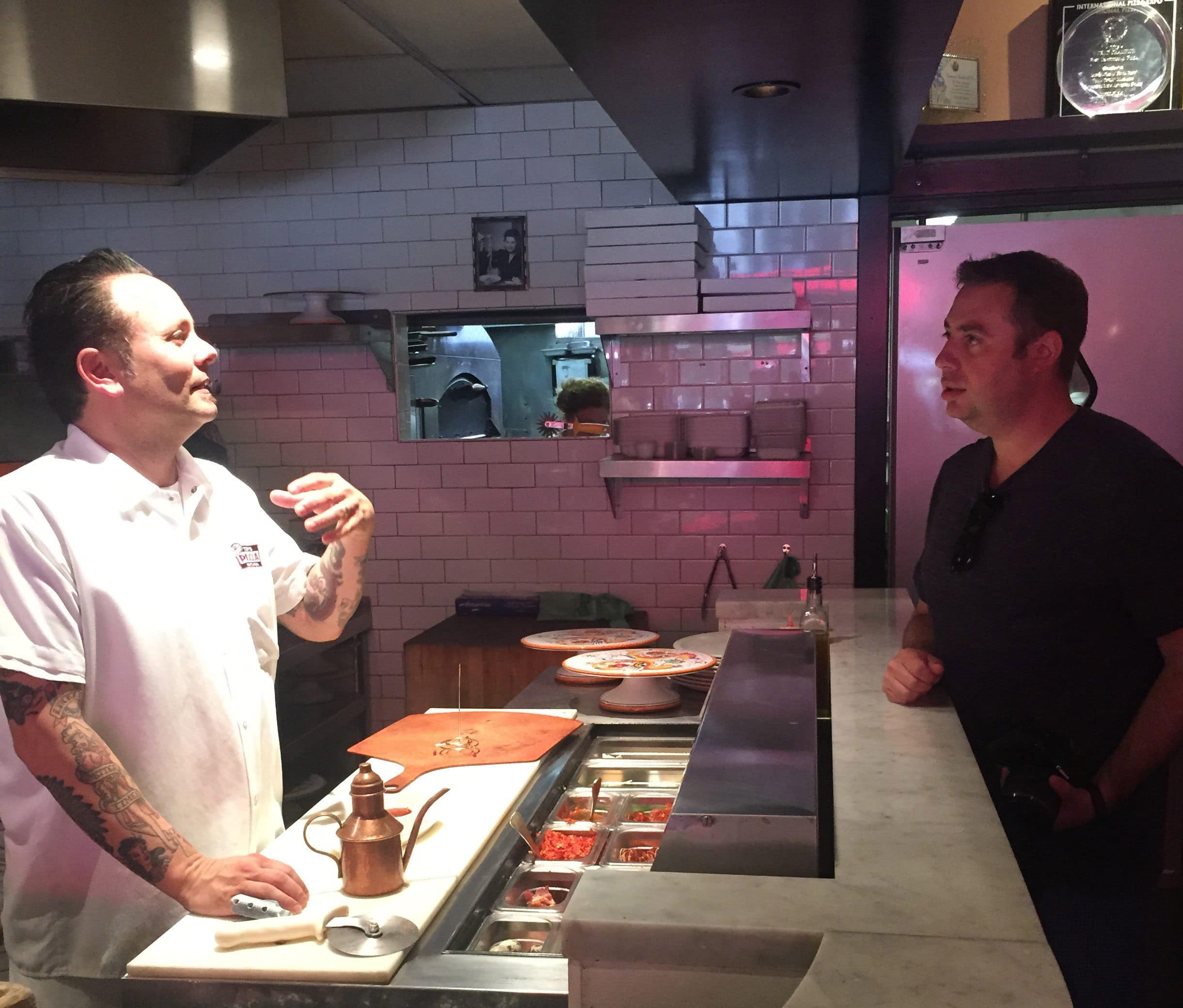 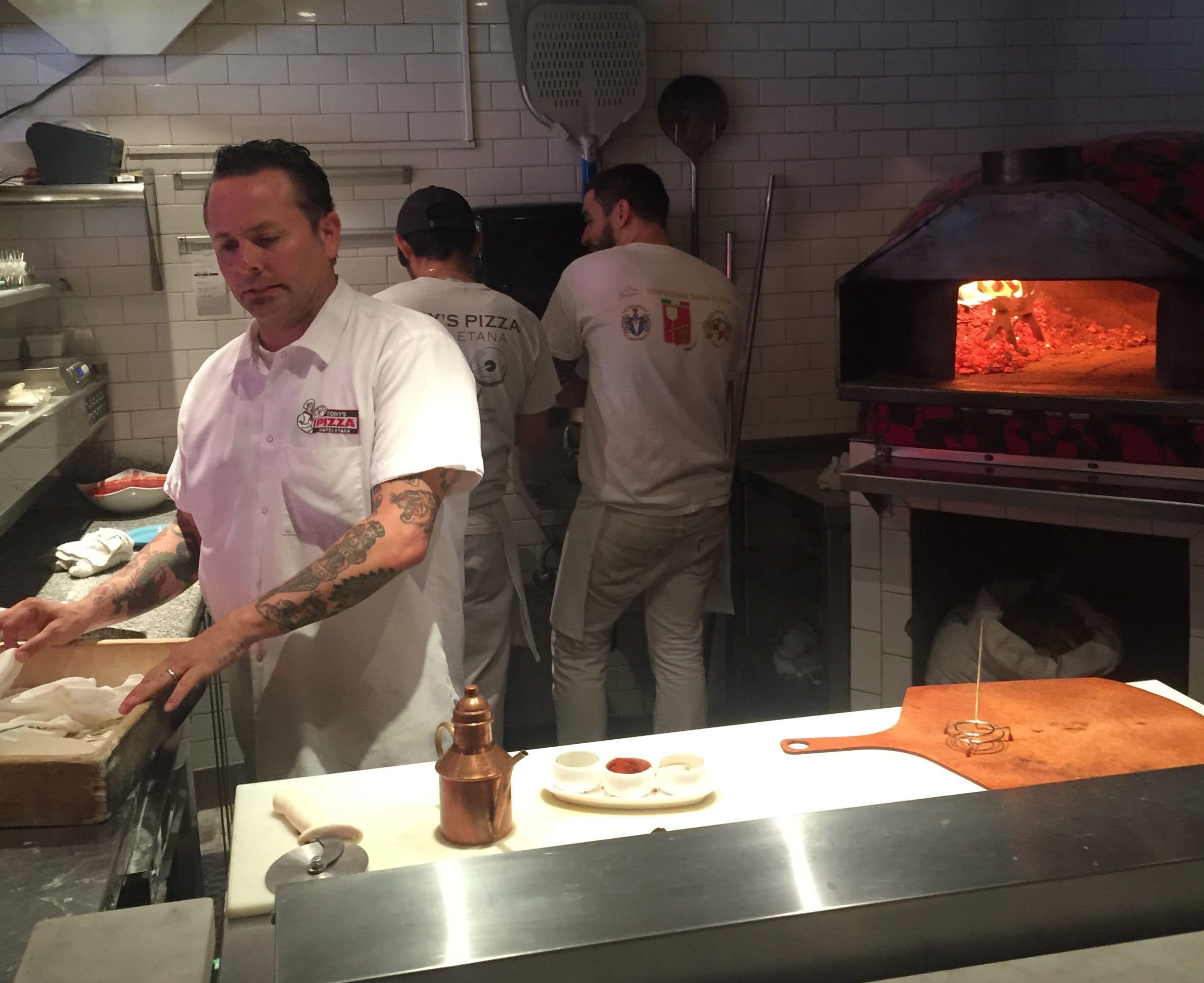 And when it dawned on him that I have lived my entire life in Chicago, he had to throw in an Italian beef as well.  Now his version is made using kobe beef, back home we are used to it being a much lesser quality of beef.  The purpose of the Italian beef was to feed many with very little meat.  This high quality combo was outstanding!

Leaving the restaurant, I couldn’t thank Tony enough.  We were stuffed and decided to walk far to deliver the leftovers to our software vendor.  Then we made our way to Capo’s!  My wife and I got there as they were opening and stayed for a drink and some good conversation at the bar.  Along the walk we found one of my favorite pepperoni suppliers Molinari & Sons and stopped in for a couple of shots.  Enjoy!

Capo’s, where you can get deep dish and my favorite pasta mostaccioli!

-While speaking with Tony about the build out for Capo’s, he started telling us about how the previous owner had some inexpensive pictures framed in the space.  During the demo, they had been tossed in the dumpster and hauled away.  A week later an older gentleman walked in and asked what happened to the pictures.  “I’m sorry but they were thrown out during construction”.  The older gentleman stated that it was a shame because they had some sentimental value to him.  Tony took it upon himself to seek out the refuse and was able to locate the pictures this guy was looking for.  When he returned them to the man, he was so excited and grateful that he asked “Is there anything I can do for you?  Anything you need?”  Tony then replied facetiously “I need a shitload of bricks” referring to the build out.  The response he received was “I have a ton of bricks in my back yard that you can have, they came from a theater in Chicago, come pick them up and they’re yours.”  Look at those pictures above, it couldn’t have been more perfect.

Enjoy Chicago’s evening pizza scene like a VIP! Our team of guides and drivers makes sure all you need to do is have fun at the party.

Chicago is the city of Big Shoulders & this walking pizza tour features a variety of styles. Taste and compare Deep Dish, Roman, Artisanal, and Neapolitan on a 3-hour tour that walks less than 2 miles.